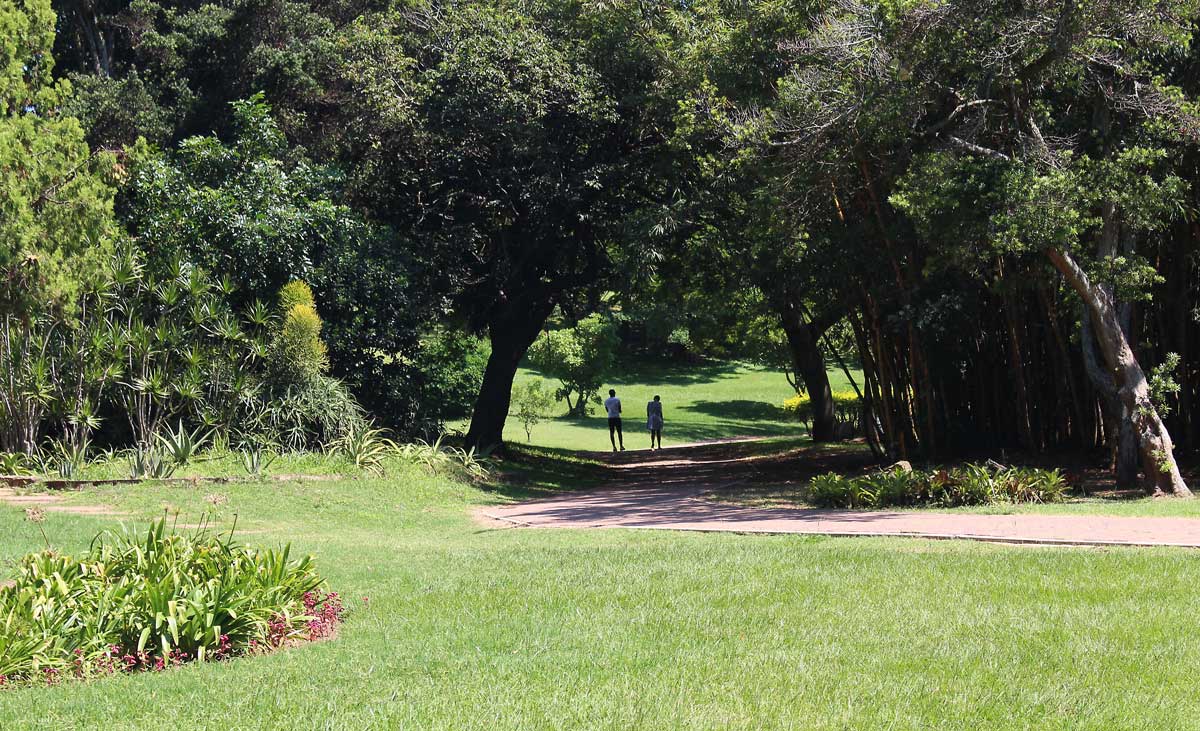 In the previous blog in this series on the Durban North Japanese Gardens, we reached the top of a slope overlooking an outdoor chapel and eastwards to the sea…

‘But at my back,” as the poet told his coy mistress, “I always hear, time’s winged chariot hurrying near.” Our stroll in the gardens had gone on a while. It was time to drive home some kind of point, or at any rate, drive home.

The route back to the carpark passed a toilet block (clean inside, if a little worn) and a party gazebo – a covered area with a Japanese look, available for hire.

Children were busying themselves in the gardens’ play area while parents hovered close by.

A few people were picnicking towards the western boundary. They were enjoying the open air and freedom on the eve of lockdown – that “deserts of vast eternity”, to quote the poet again.

It was a Wednesday, but on weekends, we are told, families and funseekers throng the gardens.

And don’t be surprised should you chance upon some pretty lavish get-togethers.

In recent years a cottage industry has blossomed in Durban’s public parks and beaches, catering for those who like al fresco dining with all the trappings, but none of the schlep.

Sometimes, there were enough cushions and drapery to furnish a middlingly decent harem, we have it on good authority.

Don’t get me wrong, your correspondent enjoys an opskop, as much as the next ou.

But glam picnicking? Plus, dog-walkers, joggers, a wedding chapel and a children’s playpark?

Is this some form of cultural barbarism and how does it fit into what might properly be understood to be a Japanese garden?

We are talking here about a highly evolved artform.

Its aesthetics are complex and millennia old; its execution, precise and manicured.

Japanese gardens are built on a bedrock of Eastern religion or philosophy – Daoism and Buddhism (including the Zen variant), as well as Chinese metaphysics.

The history of Japanese Gardens has many branches; it takes many forms.

They include Zen gardens with their raked sand, a sea around painstakingly placed boulders. Spontaneity, extreme simplicity and moderation are the designer’s lodestone.

Other Japanese gardens are more elaborate.

Still others, depending on the period, seek to reproduce famous views of natural landscapes or scenes from Daoist or Buddhist legends or poetry.

It’s hard to pin down, but clearly this is a club with a rarefied atmosphere.

Would the Durban North Japanese Gardens get through the door?

The place has in recent years come in for some criticism for being rundown and even unsafe.

But this seems to have been addressed during a multimillion rand upgrade completed last year.

For others, though, the problem with the gardens was more fundamental.

They indict the gardens for being, well, not Japanesey enough.

Take for example a certain StellaJ09, as she signs herself on Tripadvisor, the online review platform.

StellaJ09, from Augrabies Falls, in South Africa’s Northern Cape, writes: “The gardens has a lot of peace and quiet and would be ideal for a picnic but there is not much Japanese culture to be seen. It is more like a normal park in a quiet suburb.”

Another reviewer expressed disappointment at the absence of koi ponds and miniature gardens.

But others on the same site, it must be noted, were charmed by the place, praising its serenity (at least on weekdays) and beauty.

Wisdom of the elders

He has written or co-written a number of books on a variety of gardening subjects and is familiar to television and radio audiences.

Kirsten worked at the Durban North Japanese Gardens from about 1969 to 1971, doing his pupillage with the then Durban Corporation’s parks department.

The gardens were fairly well established by then, said Kirsten in a telephone interview from his home near the Crocodile River in Gauteng’s Cradle of Humankind.

Durban-born Kirsten, 69, said he had not been back for a long time, but remembered it as well maintained.

He felt the garden’s designers had made a real effort to echo some of the species that might be found in a garden in Japan.

“They tried to get the exotic colours of cherry blossoms,” he said, explaining that Durban’s subtropical climate made it too warm to use many of the species used in Japan.

“There are some fabulous exotic trees that were brought in at the time,” he said.

He recalled a number of specimens of the South American Tabebuia rosea, “A very beautiful tree with amazing pink bells”.

He also recalled a vivid yellow version of Tabebuia chrysantha.

The little bridges and ornaments in the Durban North Japanese Gardens were a nod to the originals too, said Kirsten, but conceded it was “nowhere near a true Japanese garden”.

A better example of the art, he said, could be found within the gardens at Makaranga, a lodge and private botanical gardens originally established by Leslie Rigall in Kloof, a half-hour’s drive to the west.

Edwards could not remember when last he visited the Durban North Japanese Gardens either.

Like Kirsten, he spent time there as a trainee horticulturist, in the 1960s.

He remarked that Japanese landscape architects traditionally worked with a limited palette.

They might have barely a dozen different kinds of plants, a few rocks… some sand.

The art lay in subtly combining those materials.

And this was done only after a whole year spent studying the site, with visits to it in the different seasons.

All this was a world away from much of today’s commercial landscape gardening, where planning might be the work of a few hours, said Edwards.

Which was not to necessarily imply Durban North’s Japanese Gardens was a rush job.

But its designers were certainly nowhere near as constrained as the Japanese masters when it came to the number of species they used, he said.

“I am pretty sure there would have been a Canna bed,” said Edwards, referring to the tropical and subtropical large-flowered plants that were very much in vogue in South Africa in the 60s, and 70s, but were now often regarded as an invasive species.

The Japanese Gardens was fairly well established when Edwards was there, but when pressed for his memories of it, it was the fun times and impetuosity of his youth that sprung to mind.

He recalled how as a young trainee he managed to convince the parks department’s bureaucracy to change the gardens’ signboard, from the dull amptelik version it had been using. And how he headed down to the department’s workshop where they painted up a new sign with suitably Japanese-flavoured lettering.

He also remembers letting a tractor rumble in low gear down the little valley that cuts through the gardens, with no-one at the wheel as he walked beside it.

It got Edwards some stick from his safety-conscious superiors.

Then there was driving on the beach at dawn in nearby La Lucia, practically in the surf, with another horticulturist a few years his senior and other pals.

Edwards said the car they had been putting through its paces was a Model T Ford.

Not so, insisted Peter Hattingh, the man who would have been at the wheel all those years ago.

“Always preferred Chevies,” said Hattingh via WhatsApp from Knysna, where he lives.

The car was in fact a 1931 Chevrolet Phaeton, he said.

It was now in the care of his son, Luke Hattingh, in East London, who has sent Umhlanga Tourism a photograph of the very vehicle.

But enough of old cars.

What of the gardens?

Hattingh, 77, was able to recall a few details from his own years as an apprentice horticulturist with the parks department, from about 1961.

He believes the tall trees at the Japanese Gardens date back to about then.

He remembers a marshy valley, but no stream, where the ponds were built.

There were few houses nearby then, he said, but he does remember buying an old ceramic jar from an Indian neighbour who was staying in a ramshackle place.

The jar, said Hattingh, was still in his possession, but the man he got it from and his home must have been swept away during the apartheid forced removals of the intervening years.

Like Kirsten, Hattingh remarked on the difficulties the park’s designers would have faced with subtropical conditions and how they would have found plants to mimic the look of those used in Japan.

Some years later, after Hattingh had left Durban, he spent time in Japan and visited a number of gardens in Kyoto, the country’s old feudal capital.

With the benefit of hindsight, he said, he realised Durban gardens were “kitsch”.

It was a South African park with Japanese elements, like the bridges and the ponds. But it had none of the Zen or spirituality of the originals, said Hattingh.

Still, what of the history of the Durban North Japanese Gardens?

Who established it and when. And who was its designer?

We return to the elders.

Edwards, whose professional interests nowadays lie in promoting “common sense sustainability” – a fun mix of food and indigenous forest gardening, “as a way of getting meaningful biodiversity”, seemed to think the Japanese Gardens were established in the 1950s.

He mentioned a certain Peter de Waard, who he believed was responsible for city’s northern district parks and gardens at the time

He remembered little about his father’s time with the department, apart from that he was a senior official based at Mitchell Park.

The name of public and private landscape architect Cedric van Ryneveld came up in conversation with a number of people contacted for this blog.

Van Ryneveld (1914-1975) was a director of the Durban Botanical Gardens. In the mid to late 1950s became superintendent of the city’s parks and gardens department, according to the Beaumont Project, a family genealogical website, which in turn cited the Natal Mercury newspaper.

According to the same website, Van Ryneveld was highly regarded. He was an energetic man, credited with numerous improvements to the city’s parks.

He quoted a certain Trevor Coleman, who had been with parks and gardens from 1951.

“The Japanese Gardens were definitely started during the time of Cedric van Ryneveld. He was definitely a big, seriously go-getting guy. He did a lot for Durban and parks,” said Kirsten.

“It happened in the late 50s and early 60s, the Japanese gardens were formed. Because there was nothing there in the early 50s, according to Trevor Coleman,” said Kirsten.

Kirsten mentioned another friend who had worked at the gardens in the mid 1960s. He in turn told Kirsten about a “chap from America”.

“An American horticulturist who did a lot of the Japanese work there, but no-one can remember his name. And he came with the idea of doing a Japanese garden and that was in the mid 60s,” he said.

But we will leave with history for the moment.

Our own visit to the gardens was drawing to a close.

We drove to the exit, only to find the gates locked.

A cheerful security guard eventually arrived to let us out. He explained the lockdown was beginning a little early at the gardens.

Sayōnara, then to a Durban North hybrid. Farewell to a sub-tropical Japanese Gardens, a public park, possibly designed with the help of an American.

It brought to mind the words of another, even more illustrious, poet, also on the subject of his mistress.

Her eyes were nothing like the sun; her lips nowhere near as red as coral, he wrote.

“And yet, by heaven, I think my love as rare/ As any she belied with false compare.”